I have always loved a good adrenaline rush. And I’m always up for trying something new. So when I saw the Living Social deal for the TSNY Beantown trapeze class I knew I had to give it a try. This was a little over a year ago. Luckily I had a few crazy friends who were willing to join me. So after a few months of trying to coordinate our schedules we went for our first flying trapeze class in June.

The TSNY Beantown classes are actually held in the Jordan’s Furniture in Reading. I had never been to this Jordan’s before but it is quite the experience. The entire lobby is decked out like a miniature amusement park; with a Bellagio-esque water show, Boston themed sculptures made with jelly beans, including the gold dome of the State House, Paul Revere, and a little park scene with the Make Way for Ducklings gang. As if this isn’t enough there is also an ice cream stand, candy store, and Fudruckers restaurant. And of course, the four story platform and rigging needed for two trapeze set ups, trampolines, nets and training space that make up TSNY’s school. The room is an assault on the senses, but it does help serve as a distraction from any pending fear of climbing to the top of the platform.

After checking in at the front desk I was quickly strapped into a harness which would attach to the safety lines when I jumped. The harness was tightened like a corset, and did a good job of rearranging my organs as it snuggled into my ribs for the next two hours.

Next we attended ground school where one of the three instructors for the day ran through the steps and safety procedures of a jump. One instructor would be on the ground, manning the ropes and giving us instructions on timing for each swing. Another instructor would be helping us at the top of the platform to prepare the trapeze for each swing. On your turn you are clipped in to the safety lines and the instructor holds your harness while you thrust your hips forward, toes dangling over the edge of the platform. You reach for the trapeze bar with one hand and then the other. When the person on the ground (did I mention the ground is very far away?) calls “ready” you bend your knees. This isn’t a question. When they call “HUP” you jump.

All of this was explained to us during ground school, and we practiced mimicking these movements as they called the commands. But it didn’t become real until the first time I climbed the stairs ans actually stood up there with my toes hanging on the edge. My first thought was there was that my grip wouldn’t be strong enough on the bar. The instructor called “HUP” followed by my jump and simultaneous scream. 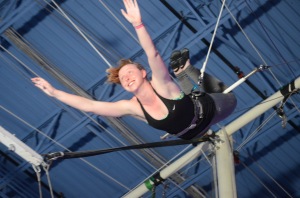 check out that smile!

And from that part on it became A LOT of fun. The instructor called for me to put my knees over the bar at the highest part of the swing. This helps to use your momentum rather then your core strength to lift your legs. From there I let go of my hands and I was SWINGING!

rocking my new back flip dismount

After a few times practicing the knee swing the instructor let me try a back flip dismount. After swinging I grabbed back onto the bar and unhooked my knees. Then with three quick swings of the hips I released and did a back flip onto the net below.

Side note: I was never a gymnast, acrobat, or really even ever all that good on a trampoline. I never was able to do a cart wheel as a kid. So this was my very first back flip in my life. And it was amazing! But the point is you don’t need any special skills to take this class, as long as you trust and listen to the instructor the entire combination is very possible for a beginner.

I probably got to practice this trick 4-5 time during the class. Each time I would come down the instructor on the ropes would give me a few pointers for hitting the timing correctly and getting the movements down. And then up to the platform I’d go again!

The day we went there were about 9 of us in the group. This would be a good time to point out that this is an all ages activity. Meaning there may be kids as young as five in your class. There was the cutest little boy in our session, and he had no fear. They have it easier because instead of jumping off the platform the instructor lifts them by their harness and holds them out over the net so they can reach the bar. This little boy in particular never got his knees over the bar, but you could tell he really enjoyed swinging. So much so that even when instructed called to let go he continued to swing. If anything seeing the little kids go for it with such ease helped alleviate my fears a little.

As the end of class neared we were given the instructions on how to do a catch. One of the instructors was going to swing on the far trapeze. If we could get our knees hooked quickly enough and fly with our arms out stretched, he would catch us, we would release our legs from our bar and swing together before dropping to the net.

just missing my catch… so close!

I had to admit it sounded awesome. And somewhat impossible. I was very aware of all the variables that I could mess up. Its very important your timing is correct if you are going to be high enough in the swing to be caught. I tried twice, but without luck. One of my friends was a rock star and made the catch on her second try! I may have screamed louder for her the    n I did on my first jump! She looked amazing! Back on the ground we all quizzed her about what it was like, but she said once he had grabbed her arms everything else just happened without much thought. After seeing her complete the catch, I knew I was going to have to take a second class and try again.

“Forget the fear and worry about addiction.”

By the end of the class my fear was out the window and addiction had set in. I couldn’t wait to take another class. Luckily TSNY Beantown has a deal where if you book a second class at the end of your first you get a third class free! Myself and my friends had all done this first class on a whim, but we all signed up for a second class, all with determination to get a certain trick down the next time.

They also have a photographer who takes pictures of you during your swings. At the beginning of class I had tried to take photos of everyone as they had their turn, but it all moves so fast that everything is a blur. This further increases my desire for a nice SLR camera, but for this experience my friends and I ended up buying the photos. Some are really cool and some show the utter terror on our faces. But all of the photos were a great way to remember the day. If you buy a package of the photos on a flash drive, you get the photos from you next class for $10 a person. We went this route so that we got digital photos rather than just one hard copy print. Also we all knew we would make that catch the next class and would want that picture for our scrapbooks!

All in all the experience was a great one. I would recommend this class to anyone with a bit of a daredevil side, looking for an adrenaline rush. It wasn’t so much of a workout, or it shouldn’t be as long as you listen to the instructors and do moves based on their timing. That being said I did feel quite sore through my back and along the side of my body for the next few days. Most of the sweat came from fear, not so much from physical exertion.

There are two more days to buy a Living Social Deal to TSNY. Your first class is only $39

Is trapeze something you would try?

Have you taken a class before?

Tell me about it below!