There’s nothing worse than getting sick. Especially being sick on a weekend. This past weekend the bug going around had finally caught up with me, and I was quite the bump on a log. Or couch to be more specific. Between naps I binged on DVR’d Project Runway All Star episodes, soup, and a good book. All of the down time  and Project Runway inspired me to finally finish a project that had been on my list forever; to re-feather a pair of Banana Republic black ballet flats.

For those of you who know me, I love shoes. I have a pretty substantial collection. My wonderful boyfriend Ben, and his good friend Don, even built me a custom shoe shelf to display all of my favorites, á la Sex in the City.

One of my wardrobe staples is a cute ballet flat with a unique twist. I love when the shoe has a fun embellishment like spikes, studs, chain or feathers. The pair in need of some TLC had been an amazing Banana Republic sale find about 3 years ago. Black, with small dark green feathers fanned out on the toe. I had worn them quite a bit, and as a result the feathers were looking a little ragged and a few had fallen off and gotten lost. It had gotten to the point that I had stopped wearing them, and thought that they were destined for the garbage can.

My first idea to salvage the shoes was to find a matching feather and replace the damaged ones. It turned out to be easier said than done. An exhaustive online search and trips to different craft stores had left me no closer to finding a matching feathers. So plan B became to replace the feathers completely. I found a speckled guinea feather at JoAnne Fabrics that would work with the black shoes, and bought a pack. 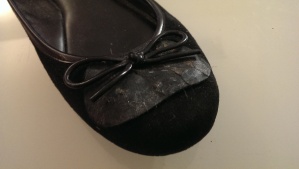 Even within the same pack of guinea feathers, not all were created equal. So I began the task of sorting the feathers, trimming them down to get rid of the downy portions, and separating them into piles based on their speckle sizes. I wanted to keep the size consistent across both shoes. Once I had finished snipping and sorting, I realized that I wouldn’t have enough of either the large or the small speckles to do both shoes. So I had to buy a second bag of guinea feathers and repeat the process. 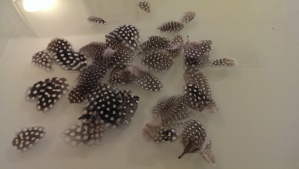 Once I was certain I had enough feathers I began removing the old feathers from the shoes. They had only been glued, so it was easy to peel them off with some tweezers. I laid out all of the feathers I planned to use on each shoe before I began attaching them to be sure I liked the composition.

About an hour and a good sized bottle of gorilla super glue later, I had completed the reincarnation of my feathered ballet flats. I think that they came out great, and the nice thing is, I know exactly which feathers to use for replacements if one gets damaged! It felt good to know that I had personalized these shoes, and had managed not to just trash a pair that had been well loved. But now I have a bunch of small speckled guinea feathers also! Anyone have a good idea of a project to use these on?

One thought on “feathered fun”