For quite a few months now my Healthworks attendance has been poor. Between the busy summer months, my recently completed design competition and having a bunch of classes at various studios to take, I’ve been neglecting the gym. I realized it was time to change things up, and after much deliberation I put my HW membership on hold, and joined ClassPass!

cp greets me by name when I login!

ClassPass is an online subscription that gives members access to book fitness classes at local boutique studios. It originated in New York, and expanded to Boston in the spring of 2014. Currently ClassPass has partnered with over 100 studios in the Boston area, including quite a few of my favorites like BTone and Exhale. And they are adding more studios every week. Members can sign up for everything from yoga to crossfit, pilates to rock climbing, and everything in between. Originally the membership was $99 and included 10 classes a month, but they recently announced that for $99 members get UNLIMITED classes each month! I had been on the fence when it was only 10 classes because I usually workout more frequently, and would hate to run out of classes or have to try to conserve them. Upgrading their offering to unlimited is what really sealed the deal for me!

you can book classes at any classpass studio right from their site. you can browse by studio, or search classes by a specific date and time.

$99 a month for unlimited classes at Boston studios is a major steal. Usually individual classes run at about $15 – $30 dollars and pop, and while class packages at different studios can help to cut some cost, it usually limits me to going to 1 – 2 studios at a time. I like to have more variety!

However because you are getting such an amazing deal on ClassPass there is some fine print factored in:

I have been going to HW for 2 ½ years now, and have really enjoyed being a member. My home gym in Coolidge Corner is pretty swanky, with lots of group classes, cardio and weight equipment, and a beautiful locker room with a spa-like sauna and steam room. They have really great trainers and I’ve had good experiences with everyone that I’ve worked with. I also always enjoyed being at a women only gym, and HW has a lot of great community initiatives such as self-defense training, and community fitness in low income neighborhoods. And while HW is pricey I could always justify the cost with how nice the facility is and how frequently I was going. In the beginning I was going to quite a few of the group classes, sometimes taking two a day, but usually in the evenings. I have been trying to shift my workouts to the morning, and I am just not as excited by the classes and scheduled availability of the group classes. I am too quick the hit snooze if my morning workout is not something that excites me, and slowly I have found myself going to HW less and less. Instead I’ve been signing up for more and more studio classes. Financially this has been a little extravagant, and I will save money with my switch to CP!

However, to be sure I’m making the right decision I have only put my HW membership on hold for now. I have three months to decide if I am really going to give up my membership, without having to pay a joining fee if I change my mind! 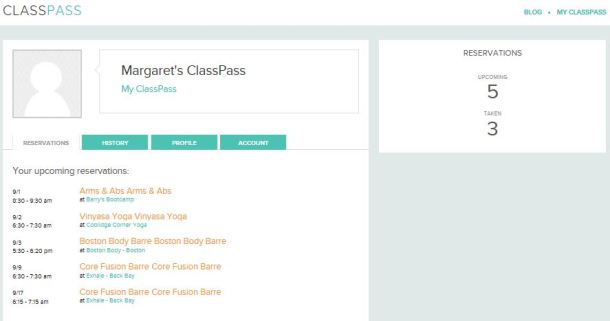 i’m hoping to get at least 15 workouts with classpass in during my first month!

ClassPass has so many great studios to choose from that I almost didn’t know where to start! I am excited that they have options both near my apartment in Brookline, as well as Downtown near my office. The day I became a member I went to my second class as B/Spoke.  Since signing up I have also been to Barry’s Bootcamp and Exhale. I am finishing off a package of classes at BTone, so between those and my new Unlimited ClassPass membership my fitness schedule has been super busy!

Next week I am scheduled to try two more new studios, Coolidge Corner Yoga and Boston Body Pilates. I don’t foresee myself getting bored with my new fitness options anytime soon!

Every week new studios are rolled out, so the number keeps growing. And there are a good number of studios being added just outside of Boston, so if you commute in there may even be options near your house and your office. Check out this great map that CP has created to show you what’s available in your neighborhood!

2 thoughts on “classpass – the gym alternative”